The last seven days have been full of sensory experiences in La Paz. I feel more at home in this city, comfortable with the altitude, and generally in a good groove.

I did a Red Cap walking tour with a few Remotes on Saturday, during which we walked around much of La Paz. We learned about San Pedro prison, made infamous by Marching Powder: inmates pay rent at this prison to live in luxury and have their families live with them. The more wealthy ones get their funds through the drug trade. We also saw Rodriguez Market and the Witches Market, which I had walked through last weekend. It was nice to spend some more time looking at llama, alpaca, and fun-patterned things.

A group of us also left the city on Sunday to check out Chacaltaya, 17,600 feet above sea level. We only hiked 80 meters, but the struggle to breathe was SO REAL. The views were amazing! We saw all the way to Lake Titicaca, on the border with Peru, and were captivated by Hyuana Potosi, a 20,000 foot peak that seemed close enough to touch. We then went to Valle de la Luna, or Moon Valley, which was formed when water combined with geyser activity. The formations truly look like another planet.

Another common site in La Paz is “Evo Si” and “Lo Mejor es Para Venir” graffiti all over the walls of buildings and highways. Largely propaganda, these came about when Evo Morales, the current president tried to change the constitution for a third time to allow him to stay in office for another term. As the country’s first indigenous president, he has a lot of support, but also some mixed reviews… Interesting to learn that these seemingly popular slogans were really placed by the government.

I had a couple of interesting culinary experiences this week:

Our street food tour had some amazing smells of flame and spice.  Unfortunately, there were also some smells of not-so-good food in some of the locations. #Movingalong

There is also the ubiquitous smell of diesel polluting the air. I’ve gotten somewhat used to it by now, but definitely appreciate fresh air whenever I can.

Finally, Rodriguez market had almost everything. Most pungent were the meat and fish sections, but seeing some of the 4,000 sorts of potatoes made up for it.

Beeping, all day and all night. The driving in La Paz is very interesting. While the cars follow things like lights (contrary to Argentina), as a pedestrian, you pretty much have to find a gap and run for it. The traffic here is pretty wild, considering it’s not the biggest city in the world. The lack of urban planning is visible. Sometimes, cars will just be stopped with nowhere to move, and rather than patiently waiting, they are sitting on their horns and honking. Not too pleasant. Living on a main avenue, I hear some of this through the night, but thankfully not too bad.

I’d be remiss not to mention (again) how hard it was to breathe at Chacaltaya. I would have to stop and catch my breath for a few minutes every 10 or so steps. At some points, it almost felt like choking, but the views were well-worth it.

I also got to relax on Saturday at MagicK, a really funky bar that had a yoga-themed room (we even had to take off our shoes), and then Diesel, a bar made of metal scraps. After a long day walking La Paz, being able to lounge was pretty fantastic.

Finally, I got to catch up with my girlfriends, my family, my boyfriend, and my altMBA peeps back home, which was so nice! Technology is truly amazing.

Looking forward to another week in this awesome, weird city, before heading to Lima for Remote Nation next weekend — all three Remote Year groups will be together! 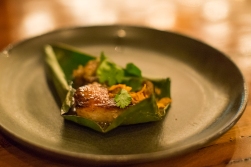 Street food tour: she’s been at this 50 years! 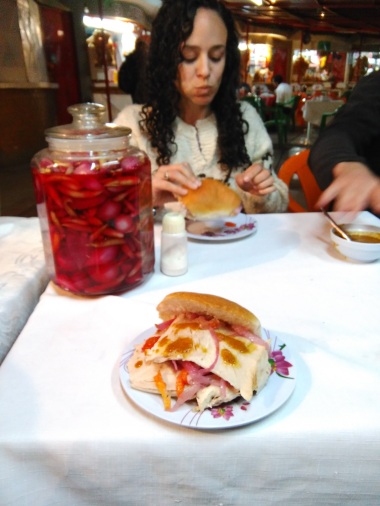 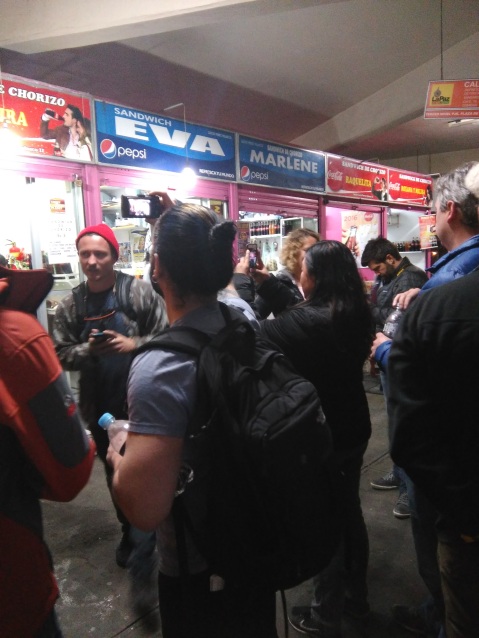 Casey. Kirsten and I with our braids 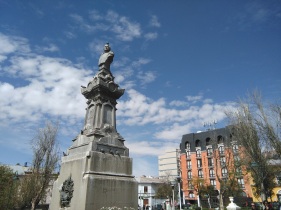 All the potatoes at Rodriguez Market 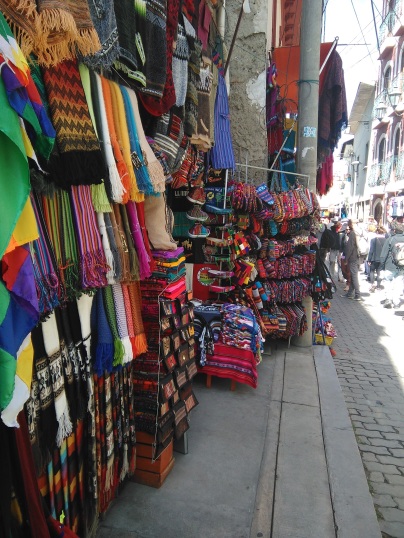 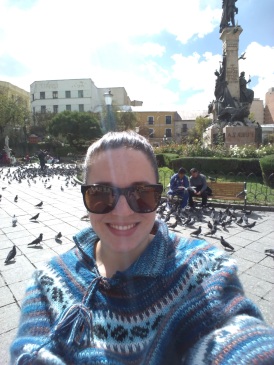 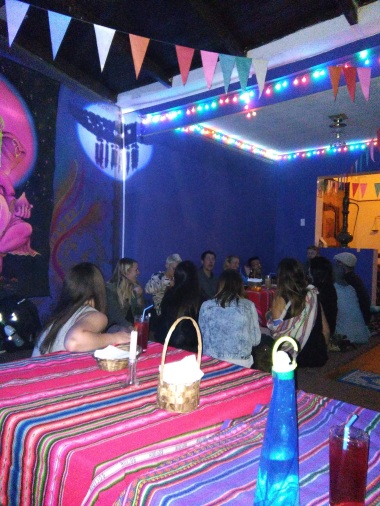 Huyana Potosi in the background

The road our bus drove on – can’t believe we didn’t fall off a cliff! 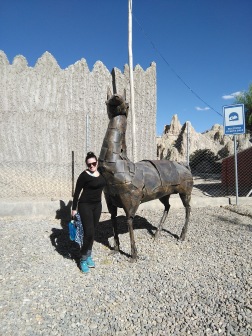 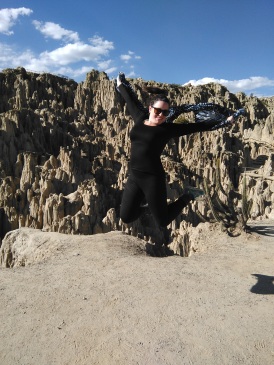