Coming back to Belgrade from Oktoberfest was rough. I feel like I was in a meat and beer hangover for two days. Seeing as it was our last week in Serbia, I did a lot that I hadn’t got to yet. I had one of the more meaningful days of Remote Year volunteering with Middle Eastern refugees, saw Austro-Hungarian town Zemun, and started a personal/professional development program called re:work.

After a month of making excuses for why I couldn’t make it to the weekly volunteering events Remotes were participating in to help with the refugee crisis, I finally manned up and did it. I volunteered with Miksaliste, an organization that distributes food and clothing to refugees from Syria, Afghanistan, Pakistan. I had mentally prepared myself for an emotional experience, and took a morning to go to their distribution center.

Miksaliste has an office in Belgrade, which basically acts as a warehouse. They had a ton of donations, and sometimes get shipments of new clothing like underwear, shoes, etc. We hung around for a while before they opened, making sure the clothes were as organized as possible. A couple of refugees that had been in Belgrade for a while were helping distribute clothing and translate. One told a tragic story of how she and her brother walked for five days straight through Bulgaria after being separated from her parents, unsure if she’ll ever see them again.

Once the doors opened, it was a constant but organized stream of refugees. Women with their children, trying to pick out the right sizes and colors – anything to hold onto an ounce of dignity after walking away from their entire lives. Young men looking for underwear, shoes, socks, pants that fit their too-skinny bodies. One man with bandaged legs was brought in to sit inside. I guessed he had just made it to Belgrade that morning after days of walking and who knows what else.

It was equally frustrating and heartbreaking to tell the refugees, “I’m sorry, no more socks,” or “We only have this size.” I found less gratitude from some that you would expect – they only wanted “something beautiful,” or wouldn’t take a pair of pants because they’d have to cuff them. Some refugees had become regulars, and the other volunteers would recognize them and turn them away. I learned that 90% of the clothing that gets picked up gets sold by the refugees, who need money to survive or make it to their next destinations. Most try to get to Germany, since there aren’t really jobs in Belgrade.

The overall experience left me with so many mixed feelings. On the one hand, here are the people that we gloss over in the news or don’t spend time thinking about – here they are, in front of me. Families broken apart, sad eyes, and still, hope. On the other hand, there are those taking advantage of the system. New shoes need to be spray-painted to make it less likely that they get sold. People are so particular about what they are picking out that you have to wonder if they truly need it.

And then you remember that maybe gratitude is too much to ask for, from these people that have been driven out of their homes and countries and will carry the emotional scarring of war forever. Maybe the dignity that comes with clothes that fit when you have literally nothing else is worth the pickiness at the distribution center. I’m glad I got to see some of this firsthand, despite the fact that it wasn’t a “feel-good” volunteering experience. Simply seeing the empathy and love displayed by the Miksaliste staff, volunteers, and other refugees was an honor.

Remote Year Cousteau overall put in 130 hours volunteering with refugees this month, and Arestia wrote an amazing piece on her experience working with another organization called RAS.

In Prague, I started talking to a fellow Remote about how I wished there was more professional development on Remote Year, and how rather than being in denial about being in the second half of the program, we should start preparing for the future. So I decided to take matters into my own hands.

I started a program called re:work. I didn’t have too much of a plan beyond starting discussions about what we all wanted life to look like post-Remote Year, having an accountability group since I’ve benefited so much from having this with altMBA alumni, and doing some skill-sharing and professional development.

The first meeting was a huge success! We had a good turnout and did a vision exercise for post-RY life. We also identified goals that we’d complete over the next thirty days and hold each other accountable to. The group said they got a lot out of the session, and I’m proud to say that the monthly meetings since have been going really well. We set goals, we talk about whether or not we accomplished them, and we have meetings during the month to work on the goals or share new skills. I’m always honored that people are still coming to the sessions and super serious about personal and professional growth.

Kelly and I checked out the Belgrade Fortress and Military Museum one morning, seeing the military history of Serbia from the middle ages to modern-day war in former Yugoslavia. Not all the captions were translated, but it was nice to spend a couple of hours learning about how Serbia has pretty consistently had to defend its strategic position between East and West. There were also super-cool augmented reality exhibits where you could hold an iPad up to a certain spot and hear an animated soldier talk about a brief experience. Advanced stuff.

I also played some last games of tennis, had a couple of delicious group dinners, and got a group together to work at Lemon Chili, an awesome boat-café that was recommended to us by someone we met at the Junction.

Our farewell party included Serbian traditional dance, tons of meat (as expected) and a late-night visit to a Belgrade club, which I promptly ditched because it was so smoky that I couldn’t deal.

On our last day in Belgrade, I checked out Zemun, which used to be a separate city part of the Austro-Hungarian empire, but is now part of greater Belgrade. It featured cobblestone streets, old-school German-looking houses, and a lovely viewpoint from the Zemun Tower.

Kelly and I in front of the fortress 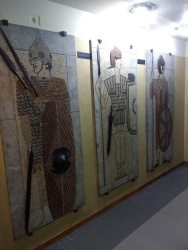 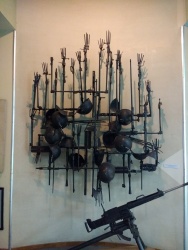 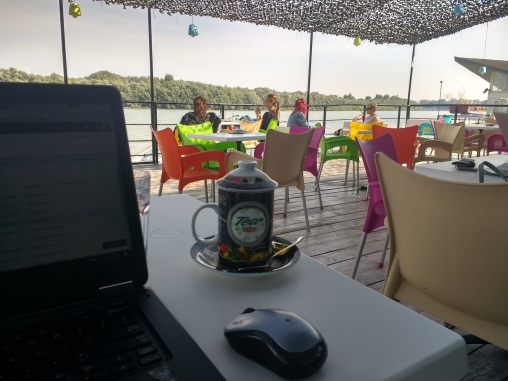 Volunteering: piles of clothes at Miksaliste 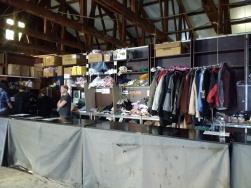 Ready for the refugees

Beautiful banner of hope, signed by refugees and allies 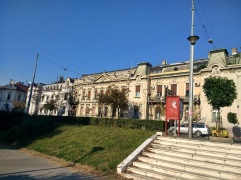 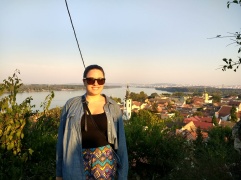