Even though I wasn’t quite ready to leave Bali, I was so excited to meet up with Angela and Natasha, who were coming to visit for two weeks. I had just seen them both in New York, but the last time I spent significant time with my bestie Angela was on our trip to Greece. The three of us had traveled together to Ireland in 2013 and had one of the most memorable trips driving through the Irish countryside. Even though I was working during our trip, I was so looking forward to adventures around Malaysia.

Arriving in Singapore after being in Southeast Asia for two weeks was almost reverse-culture shock. It was so clean and orderly, everything was in English, people followed traffic lights and stop signs… Crazy!

Angela, Natasha and I met up in our hotel and explored the city for the next 24 hours. We stayed near Robertson Quay, a canal-side neighborhood with lots of restaurants and bars. We had banana leaf at Banana Leaf Apolo, checked out the Gardens by the Bay, a man-made park with tree-like sculptures that get lit up at night, and went to a few temples in Chinatown. We had a bunch of delicious food at a Hawker market, which is basically full of food stalls and cafeteria-style seating. We also got to meet up with a fellow altMBAer who lives in Singapore, who took us to his favorite bar with amazing cocktails, Hopscotch. We chatted about life in Singapore, I tried and failed to solve a Rubik’s Cube, and probably ended up playing Heads Up at some point.

The highlight of our time was watching sunset at Marina Bay Sands, a humongous hotel that borrows my name with an amazing infinity pool overlooking the city. It almost looks like a ship is parked on top of the hotel, and the views from the top are just stunning. We lucked out with a couch becoming available right when we got there, and hung out for a few hours enjoying the hazy views.

I could why this would be a weekend getaway for expats living in Southeast Asia, because it affords all the comforts of home. I found Singapore to be pretty devoid of culture or sights, but full of good food and drink, lots of luxury options, and many tourists.

Our next stop was Langkawi, an island off the northwest coast of Malaysia that’s not super-touristy yet. It’s actually so close to Thailand that it’s often used as a jumping-off point for visiting the Thai islands.

We spent a couple of days relaxing beach-side while I was working, taking plenty of swimming breaks, shooting Boomerang videos and trying to avoid the jellyfish that seemed to be everywhere.

We did an amazing mangrove tour with Dev’s Adventure Tours one of the days, exploring these trees that thrive in-between salt and fresh water marshes and house wildlife ranging from snakes and birds to monkeys. Our guide, Jerome, was so knowledgeable and interesting. We learned about bats while visiting caves, about how Langkawi became a popular destination after the Aceh Tsunami ravaged the Andaman Thai islands, and about how mangrove tree seeds can float for thousands of miles in the ocean before implanting themselves into ground.

Then, it was time for Thanksgiving! There ended up being a bunch of Remotes in Langkawi, so we organized a big Thanksgiving dinner at the Berjaya Resort. Thanksgiving is my favorite holiday, and I loved going around the table talking about what we were each grateful for while eating Thai-Malay food and overlooking the aquamarine water.

The highlight of our time on Langkawi was a chartered catamaran tour that Remotes organized for the day after Thanksgiving. It was pricey, but so worth it. We got to check out some small unpopulated islands around Langkawi, listen to tropical house, enjoy each other’s company, and pretend like we lead a life of luxury. The catchphrases of the day were “as you wish” and “I’m living my best life.”

Our last day on the island was spent checking out some waterfalls, which Angela climbed like a true Amazonian and did yoga headstands on, swimming on the northern beaches, which were so beautiful that we wished we had come sooner, and jet skiing which was so fun until my jet ski broke down and Angela had to rescue me.

Last thing: we saw some creepy-looking monkeys that we researched. They are Dusky Leaf Monkeys (great name) and are known as some of the cutest monkeys out there. You decide.

I loved Langkawi. It was so peaceful and less touristy than most islands, but still had everything we were looking for. We had so much fun eating and drinking to our heart’s content, feeling bougie on the boat ride, and being adventurous in mangrove forests and chasing waterfalls.

George Town, Penang is probably the second-biggest city in Malaysia. It’s technically on an island, though connected to the mainland by a bridge, and is full of quaint colonial charm from its time as an important trading post of Malaysia. There is a ton of Chinese influence in George Town, including our hotel, the Blue Mansion. The mansion was a splurge, but so amazing. It’s a beautifully restored 19th-century mansion that a successful Chinese businessman built for his family, notable for its indigo color (I later learned this color comes from blue pea flowers).

We explored the adorable streets full of old shop-houses and some incredible street art by Ernest Zacharevic, got henna tattoos, and took an awesome cooking class with Nazlina. During the cooking class, we toured the market, learning about tiny anchovies used for flavoring in Malay cuisine, the difference between green coconuts (used for their water) and brown coconuts (used for their meat), and seeing where all the amazing curries originate. We got to prepare our own ingredients (pretty unique since most cooking classes typically pre-portion out ingredients) and make a few dishes that ended up being so delicious. It was very at-home style cooking class that we really enjoyed.

The highlight of our time on Penang, though, was a day trip to Monkey Beach. We took a boat to this secluded beach, planning on being there for a few hours, and by what can only be fate, ended up staying overnight. We ran into a Malay Rastafarian and his motley crew of friends: a young Russian snowboarder, an African choreographer, and a Romanian free spirit/restaurant staff trainer. What started off as a few beers in Rasta Aslan’s hut turned into dinner, a campfire, and sleeping in tents on the beach. We had an intense experience of Truth or Truth, where we went around sharing our perspectives and stories and getting to know each other on a much deeper level than is typical. I feel like each of us learned a lot about ourselves and each other on an almost-spiritual level, and will always have Monkey Beach to look back on. As soon as we left, we felt like we had spent the night in the Twilight Zone and not being sure if Monkey Beach was even real. We still joke that if we ever went back, there’d probably be nothing there and our night was a glitch in the matrix…

Penang was so cute and so much more manageable than Kuala Lumpur. The first Remote Year group spent their month in Malaysia based in Penang, and I couldn’t help but be jealous. It has a vibrant café scene, lots of expats, and some of the most amazing food – and is close to beaches! And I’ll always associate Penang with Monkey Beach.

Back to Kuala Lumpur

Our last stop was KL. We stayed at the Face Suites, with an awesome infinity pool overlooking the city. We made the most of our last couple of days together, even though none of us loved the city itself:

On our last day, we took a day trip to Malacca, the old capital of Malaysia. It unfortunately rained almost the entire time we were in Malacca, but I loved the quaint old town full of Chinese shophouses. It was similar to Penang, but even cuter. We learned about the Portuguese history of Malacca (it was under Portuguese rule in the 16th-17th century), saw beautiful Chinese temples, and visited the Floating Mosque, a beautiful mosque on the ocean that often looks like it’s floating.

Angela, Natasha and I had such an amazing time exploring Malaysia. It’s a country I didn’t think I’d ever visit, and I really fell in love with its colonial charm, its food and its history and culture. It was time for us to part ways for me to rejoin Remote Year and head to Chiang Mai, Thailand, but I was so happy to have spent a couple of weeks with my people. Can’t wait for the opportunity to travel together again! 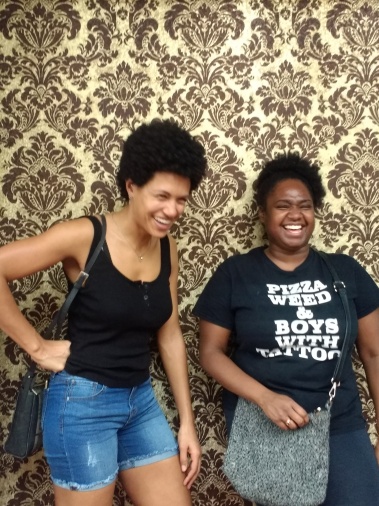 When your friends fly around the world to see you — Singapore 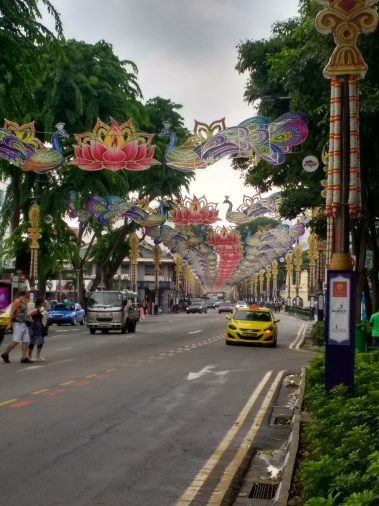 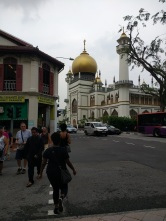 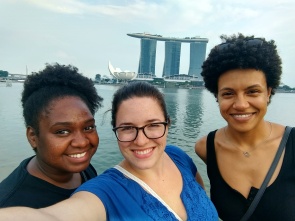 Natasha, me, Angela in front of Marina Bay Sands 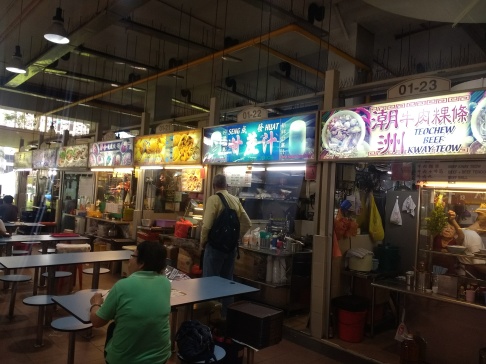 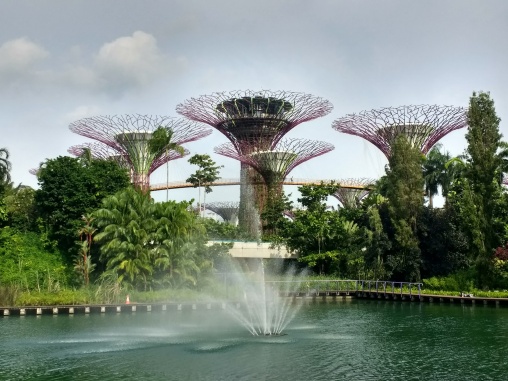 Gardens by the Bay, Singapore

Gardens by the Bay, Singapore 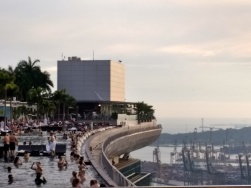 The pool at Marina Bay Sands 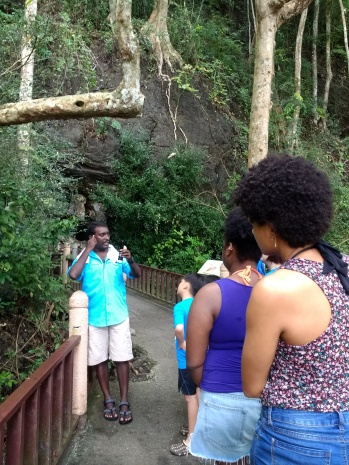 Learning all the things from Jerome 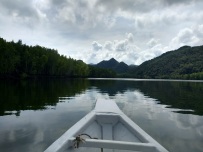 Sunsets in Langkawi were pretty great

Thanksgiving dinner with Angela and Natasha

Overlooking the bay at the Berjaya, Langkawi

Just my closest friends on a boat 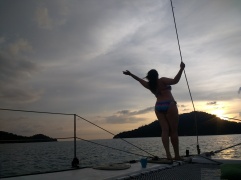 The Remote Year crew on our private boat 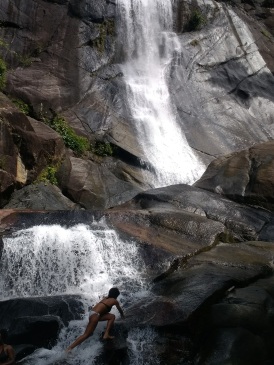 Had fun splashing around

Our home on Monkey beach…

Our home in Penang (Blue Mansion)

Arestia interacting with the street art 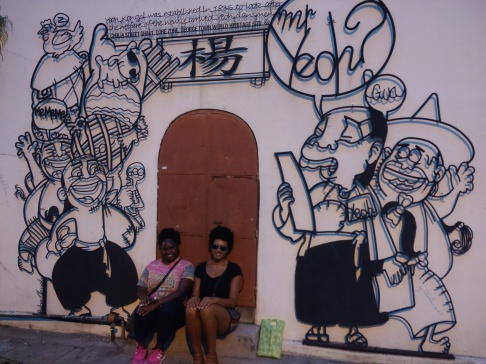 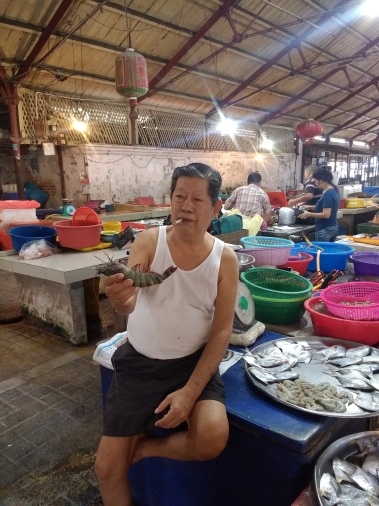 Cooking class market tour: a man and his fish

Curries galore at the market 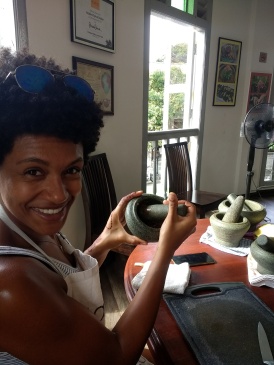 Cook-off on our pad thai

The final product was delicious!

Our view from our KL hotel 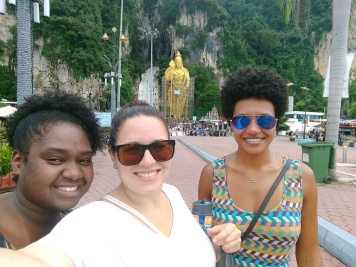 Long way up to Batu Caves 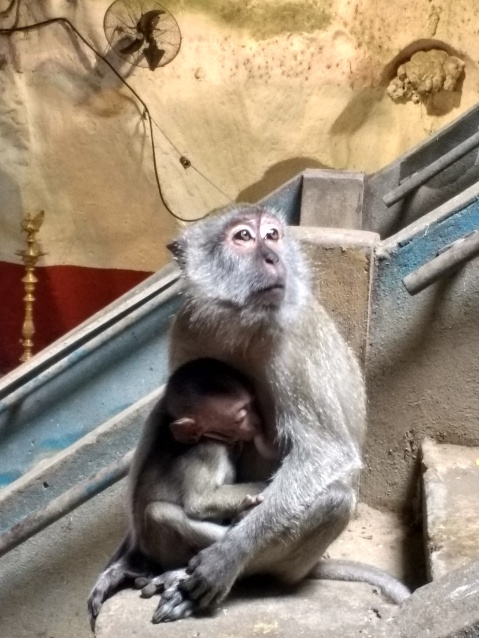 Circle of life at Batu Caves 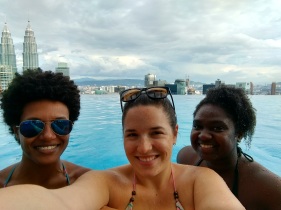 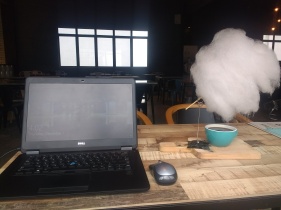 Working from Lepaq Lepaq, with its famous rainy day coffee

Our last day together – Malacca 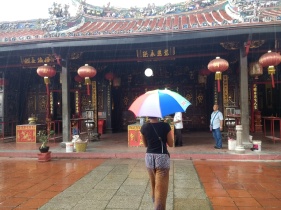 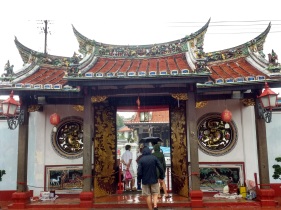 Diane and Angela at the floating mosque